Ah… Beethoven. Who hasn’t heard the familiar “Ode to Joy” melody from Beethoven’s Ninth Symphony? Or the “ba ba ba BA” motif from his Fifth? Or the delicate main theme from “Fur Elise”? There are so many memorable pieces from Beethoven (or, as one student referred to him, much to my amusement, “Bacon”).

One of our March composer studies will focus on Ludwig van Beethoven. Beethoven was really a very revolutionary composer during his later years. He broke a lot of the Classical Era “rules” and chose to make more dramatic music than was popular at the time. But he wrote from his heart, and he composed increasingly more complex and difficult works of music as his hearing declined. Can you imagine how he felt as a composer and musician as his deafness got worse and worse? And yet, he didn’t quit or give up. His musical talents allowed him to compose even though he could no longer hear the instruments for which he composed. Amazing.

Our Beethoven lap book this month contains quite a bit of information. I had a really hard time limiting the number of musical examples to give to you – there are just so many to choose from!

Here’s the cover of the Beethoven Lap Book!

Here is a look at the inside. Lots of stuff going on in there! 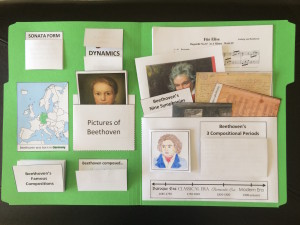 Have fun putting together the various pieces of the lap book, and learning about Mr. “Bacon” this month! 🙂 Leave a comment to let me know your thoughts about Beethoven and his music.

Now that I have assembled several of the Composer lap books, I wanted to share a few tips & tricks with you to make the assembly process at home go as smoothly as possible. Note also that there are brief … END_OF_DOCUMENT_TOKEN_TO_BE_REPLACED