Our final composer study in our Eras of Music unit will be modern American composer, Scott Joplin. Joplin is known for developing the form of jazz called “ragtime”, which combined European classical styles, the American march, and the rhythms of African folk music. Ragtime music was highly popular from the late 1800s to around the 1920s, and generally featured a syncopated melody with a leaping chord accompaniment. Ragtime pieces also usually contained several distinct themes of set bar length and arranged in typical patterns.

There is a Joplin selection in my Modern Era YouTube Playlist that plays features something called “piano rolls.” The YouTube selection features Joplin’s original piano rolls – there are only seven surviving piano rolls of Joplin playing his own piano rags (recorded in 1916). Piano rolls are paper rolls that go inside mechanical “player pianos.” Player pianos could then play back the music as originally recorded on the paper rolls – kind of like a movie projector that uses film today. Here is a person using a player piano that is playing Joplin’s “The Entertainer”!

Here is a closeup of a paper piano roll. This particular piano roll contains “The Thunderer”, by John Philip Sousa. 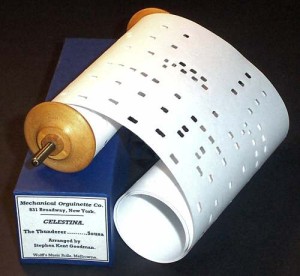 We are very lucky to have any original “recordings” of Scott Joplin performing his original works!

This month’s lapbook will be completed over the two weeks that we have regular lessons scheduled. This lapbook is fairly straightforward and does not have a lot of complicated elements, so it’s perfect for a shorter lesson month. Here are pictures of the completed lapbooks, for your reference. 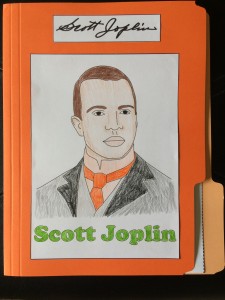 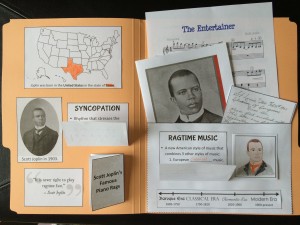 Inside of Joplin lapbook!

Enjoy our last composer study and don’t forget to listen to the Modern Era playlist selections this month!