Well, here we are at the final Era of music that we will study together this Trimester – the Modern Era. I hope you all have enjoyed experiencing music from different times of history: from the very, very long ago to the not-so-long-ago.

The Modern Era is generally considered to run from 1900 to the present. Composers were even more interested in finding new sounds than in the previous eras. Composers also experimented in using instruments in non-traditional ways, such as plucking at the strings of the piano, tapping on the bodies of instruments, and using non-musical objects to create music (see the John Cage video in my Modern Era YouTube playlist where sheets of metal are used as part of his composition).

Sometimes Modern music sounds “funny” to us, or like it doesn’t make sense. That’s because composers were also experimenting with different ways to use harmonies and the tones in a scale (or in the case of bitonality, writing a piece of music that is played in two different keys at once!).

Jazz played a major role in the development of Modern music, as we will see in this month’s composer study of Scott Joplin.

By the mid 1850s, the piano had also developed into the instrument that we all know today – with 88 keys and three pedals – the damper pedal on the right, the una corda (soft) pedal on the left, and the sostenuto pedal in the middle. Electric keyboards and digital pianos also began to be developed in the 1950s. These instruments can be more portable and do not need tuned, but they also have a different feel as acoustic pianos and do not produce the same tonal variations. 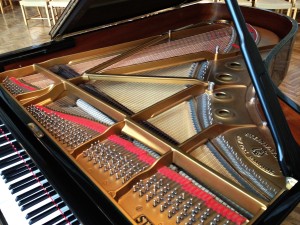 Inside of a modern Steinway grand piano

Here is the overview document of our May Modern Era study, as well as a link to my Modern Era YouTube playlist. Let me know what you think – some forms of Modern music can take some getting used to!